Only nine of these cars were manufactured and it has been produced to the exact 1957 specification by Jaguar Land Rover Classic’s expert craftsmen. 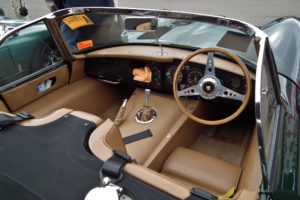 The stunning XKSS, finished in Sherwood Green paint, has been created by the Jaguar Classic engineering team ahead of the production of nine cars for delivery to customers across the globe in 2017.

Often referred to as the world’s first supercar

The car is currently going for £ 1 million in Coventry, United Kingdom.